Sign up to myFT Daily Digest to be the first to know about Ping An Insurance Group Co of China Ltd news.

Shares in Ping An Insurance fell on Friday as concerns mounted over contagion from a crisis surrounding real estate developer China Evergrande, forcing the country’s biggest insurer to issue a statement saying it had no exposure to the property group.

Ping An shares closed down 3 per cent in Hong Kong, with prices earlier slumping more than 8 per cent as trading volumes soared.

The price drop came as concerns grew that a liquidity crisis at Evergrande, the world’s most indebted property developer with almost Rmb2tn of liabilities, could ripple across China’s real estate sector and financial system.

This week, retail investors in wealth management products related to Evergrande descended on its Shenzhen headquarters to demand their money back, in the most visible display yet of the deteriorating situation. Last month, the property developer warned of the risk of default if it failed to raise more cash.

“For real estate enterprises that the market has been paying attention to, PA insurance funds have zero exposure, neither equity or debt, including China Evergrande,” Ping An said in a statement as it rushed to reassure investors.

Ping An has Rmb63.1bn ($9.8bn) of exposure to Chinese real estate stocks across its Rmb3.8tn ($590bn) of insurance funds, and took a $3.2bn hit in the first half of the year after the default of another developer, China Fortune Land Development.

The insurer is head of the creditor committee for China Fortune Land, which specialises in industrial parks in Hebei province and suffered from delayed local government payments. One of its restructuring advisers, Admiralty Harbour Capital, was hired by Evergrande this week. 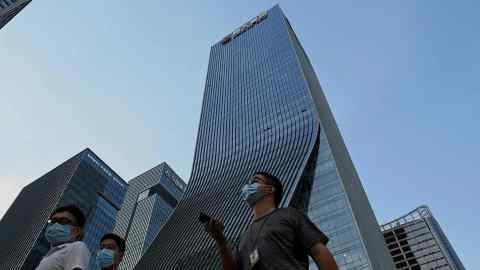 Evergrande’s US-dollar bonds maturing next year are trading at 31 cents on the dollar, and its share price has collapsed 82 per cent this year as doubts grow over its ability to repay its $89bn debt pile. The dive has wiped tens of billions of dollars off the wealth of its founder, Hui Ka Yan, who was once China’s richest man.

A frantic sell-off surrounding Evergrande’s debt and equity has shown signs of spreading to other developers, including Guangzhou R&F and Fantasia Group. On Thursday, Fitch downgraded Fantasia’s credit rating to B, warning of “uncertainty over the refinancing of a significant amount of US-dollar bond maturities through to 2022 in light of ongoing capital market volatility”.

Beijing has over the past year sought to crack down on excessive leverage across its vast real estate sector, which makes up more than a quarter of the economy. In August, it issued a rare public rebuke over the need for Evergrande to reduce its debts.

Evergrande is rushing to sell assets as it grapples with slowing sales of apartments, which it relies heavily on customers buying in advance, and the need to maintain payments to its suppliers and creditors across its hundreds of development projects.