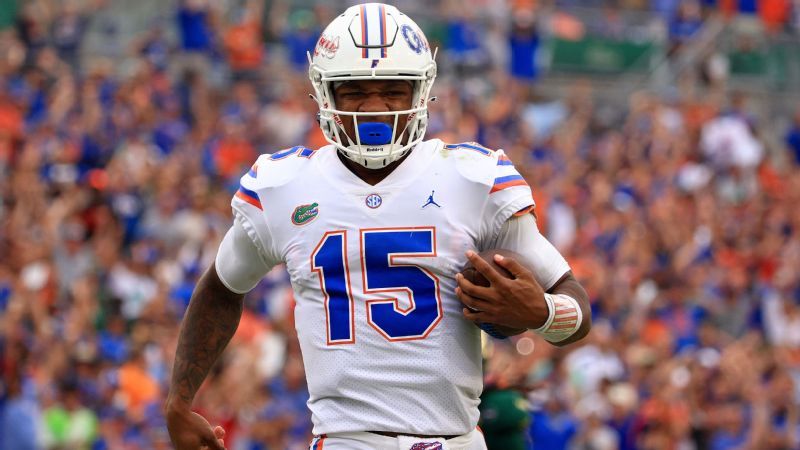 There are a ton of impressive numbers we can use to describe the extraordinary career of Nick Saban, the head coach at Alabama.

The most attention-grabbing question of the week involves how Saban’s teams have been so good for the past 14 seasons.

1 – Can Florida, playing in the vaunted Swamp, be the ninth team to beat a No. 1 Alabama team coached by Saban?

When top-ranked Alabama travels to No. 11 Florida on Saturday it will mark the 90th time – yes, that’s 90 times that Alabama has played a game under Saban as the No. 1 team in the land.

Here are four more burning questions for the weekend, all dealing with quarterbacks:

Redshirt junior Emory Jones has started the past two games and is expected to take the first snap against Alabama in the Swamp.

But fans are intrigued by the athleticism of redshirt freshman Anthony Richardson, who came off the bench and was very impressive against South Florida, throwing for 152 yards and rushing for 115 more, including an 80-yard touchdown run.

Coach Dan Mullen said he has a plan to play both quarterbacks.

The X-factor is Richardson’s hamstring, which he tweaked at the end of that 80-yard run against USF. Will he be at full speed? Mullen said Richardson has been fine during practice this week.

Let’s put it this way: For the Gators to have a real shot at winning they are going to have to get some production from Richardson.

3 – We actually have two quarterback questions in the Georgia-South Carolina game in Athens?

Daniels, who has a strained oblique muscle, did not play in last week’s 56-7 win over UAB. Turns out the Dawgs didn’t need him. Fifth-year senior Stetson Bennett IV got the start and threw five touchdown passes in the first half.

Coach Kirby Smart did not tip his hand on the starter when the met with the media late in the week.

Will Zeb Noland realize his lifelong dream of playing in Sanford Stadium?

Noland, who grew up and went to high school about 10 miles from Athens, may start at quarterback for South Carolina on Saturday. Noland, who previously played at Iowa State and North Dakota State, went to South Carolina as a graduate assistant earlier this season. But when Gamecock starter Luke Doty got hurt, he stepped in and won the job.

He is 2-0 after wins over Eastern Illinois and East Carolina. Doty may be ready to go, but if Noland gets into the game it will be a very special moment for his family. Noland played for his father, Travis Noland, at Oconee County High School.

4 – How will Auburn’s Bo Nix fare on the road at Penn State?

The book on the junior quarterback is that he fares much better at home than on the road. A recent article on AL.com reveals that in nine true road games as Auburn’s starting quarterback, Nix has completed only 54.5 percent of his passes and has thrown more interceptions (10) than touchdowns (9). Auburn is 4-5 in those games.

In Nix’s first two games this season he has completed 74.5 percent of his passes. But understand that was against Akron and Alabama State. Nix now has to face a Beaver Stadium crowd of over 100,000 that will be having its traditional “White Out” game.

5 –  Will MS State’s Will Rogers continue his improvement in what looks like a tough road game at Memphis?

Rogers, a sophomore, has a special place in the career of head coach Mike Leach. Last season Rogers became the first-ever true freshman to start for Leach. There were good moments and not-so-good moments.

In the opener against Louisiana Tech on Sept. 4, Rogers was not all that sharp but rallied his team from a 20-point deficit in the fourth quarter to win 35-34.

But in last week’s 24-10 win over N.C. State, Rogers completed 33 of 49 passes for 294 yards and three touchdowns. Leach was impressed with how Rogers was in synch with his receivers.

“I thought he took a step (forward), there’s no question about it,” Leach said.

Mississippi State is trying to start 3-0 for the first time since 2018. The Bulldogs have LSU, Texas A&M and Alabama in their next three games.