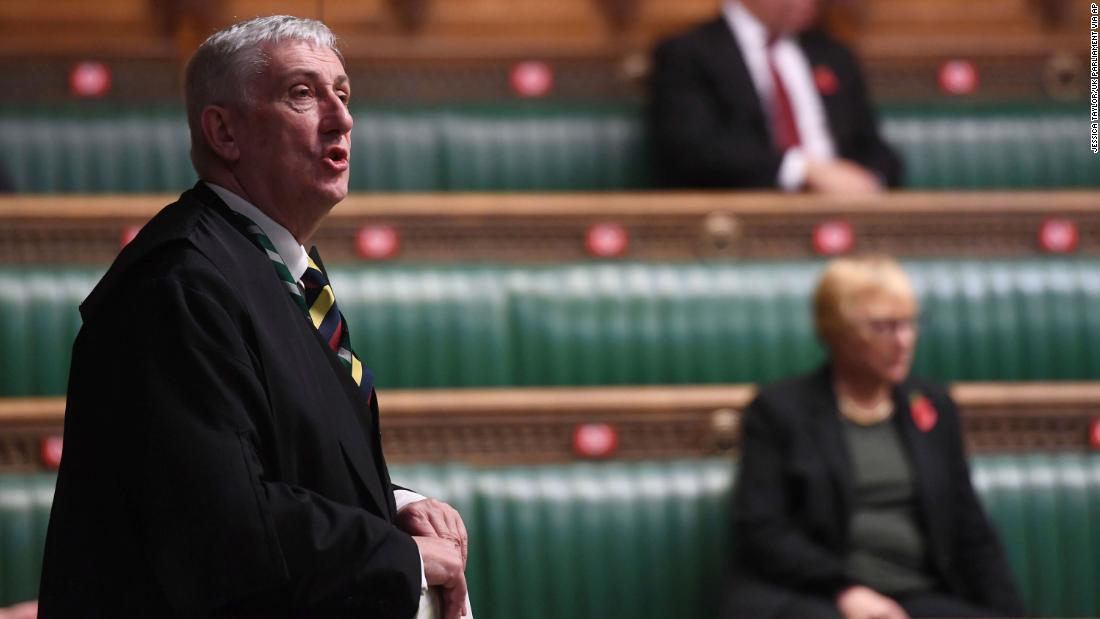 “What happened at Capitol Hill, we are going to make sure it doesn’t happen here,” Hoyle told CNN in an exclusive TV interview.

Hoyle, who as speaker is the highest authority in the British House of Commons, is hosting US House Speaker Nancy Pelosi and other counterparts at the G7 Speakers’ summit this weekend. The in-person event is taking place in his hometown of Chorley in northwest England, with a focus on “secure and open parliaments.”

Addressing the January 6 insurrection at the US Capitol, Hoyle said: “That was mob rule taking over, trying to smash democracy. These people don’t believe in our values, they don’t believe in democracy. You know, the fact is that if we haven’t got democracy, we have dictatorship. That is never the answer.”
Hoyle has experienced homegrown terror in his own parliament. On March 22, 2017, Hoyle — then Deputy Speaker — suspended a sitting of the House of Commons as a terror attack unfolded in Westminster. Five people died, including a police officer, after the lone attacker mowed down pedestrians on Westminster Bridge, rammed his car into railings outside the Houses of Parliament and embarked on a stabbing rampage.

“I was sat in the chair that day. To be tapped on the shoulder to say there’s a policeman dying on the cobbles of Parliament is something I never want to go through again,” Hoyle said.

The Westminster attack came less than a year after British MP Jo Cox was shot and stabbed in her northern England constituency by a far-right extremist.

“The tragedy of losing a rising star of this Parliament sent shockwaves, not just in this country but right around the world, to say: this is not just (a) perceived threat,” said Hoyle, who was elected speaker by his fellow MPs in November 2019. “That was the real start of shock.”

The G7 Speakers’ summit will also address other modern-day security threats, including online trolling and harassment.

“Women MPs get the worst of it. The worst brunt of that goes to female ethnic MPs as well. The fact that they feel real threats and real threats of violence against them, that’s not acceptable,” said Hoyle. “When an MP says to me, ‘Lindsay, I don’t think I’m going to stand again. I don’t feel safe. My family must come first,’ I know we’ve got to do more.”

Hoyle also spoke to CNN about current mistrust toward politicians and the bitter rhetoric of political debates.

A petition calling for lying to be made a criminal offense in the House of Commons has garnered more than 130,000 signatures and may be debated by lawmakers. The government has said, however, that it “does not intend to introduce legislation of this nature” and that MPs’ conduct in the chamber “is a matter for the Speaker.”

Asked how the issue should be handled — with opposition allegations of lying extending to Prime Minister Boris Johnson — Hoyle said he was unable to address it despite holding the most authority in the chamber.

“Speaker Pelosi is very political, but I haven’t got the same power … Not saying I would refuse it. In fact, it’s very tempting to be able to give me that political power as well. But what I promised was to be impartial. It’s my impartiality that I have to protect.”

When asked if he thinks considers behavior in parliament is improving, Hoyle said he genuinely thinks it is getting better.

“Of course, we’re going to have division of views. That’s what politics is all about,” said Hoyle. “I don’t want them all to agree with each other. That would be pretty boring for me as well. So, it’s about having excitement in the chamber, but it’s also about controlling that excitement as well.”